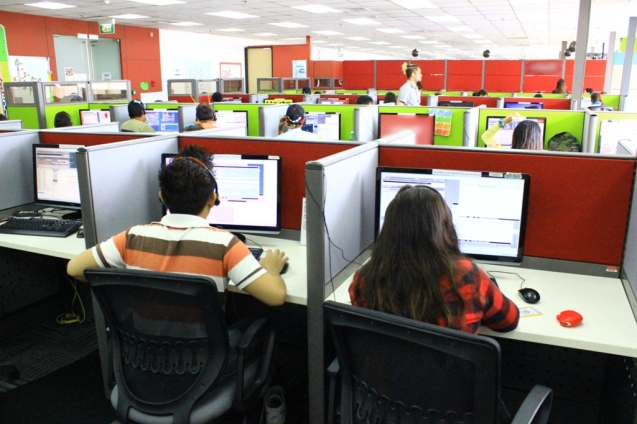 As China’s economy falters, another Asian country has emerged as one of the fastest-growing economies : the Philippines. Since 2010, the country has recorded an annual performance of 6 percents plus. In the archipelago, economy is driven by call centers.

Raymart, Jessica or Michael : in the Philippines, a former US colony, American-sounding names are fashionable. In such a way that when they call a hotline, most customers don’t realize the person who picks up the phone is actually based overseas, mostly in the Philippines.  More than one million Filipinos already work for the sector of BPO (business process outsourcing), which includes call centers.

Louis Siose is one of them : he dropped out of college at 20 years old to join a call center in Metro Manila : « It wasn’t really that hard for me since I know how to use the computer and speak English. »

The Philippines has been the call center capital of the world for several years. Before, it was India, another Asian English-speaking country. But according to the Indians themselves, on the phone the Philippine accent appears more « neutral ». And apparently, this matters.

« English is almost our first language. »

Mylene Morillo is the founder of American English, a Manila-based language school. Every month, they used to train about 100 new students for call centers. The Philippines even has become a budget destination for foreigners willing to learn English. The archipelago advertizes itself as being the third largest English-speaking nation, just after the US and the UK.

Mylene Morillo : « It’s the medium of instruction in the Philippines schools. Our system was designed in English. »

Braden Wheeler is an American living in the Philippines. He has been involved in the call center industry for the past 16 years.

« From a training perspective, the call centers have changed dramatically how they train Filipinos to be call center employees or agents. The approach was to minimize the accent almost to mimicry it as if they were talking to somebody inside the US. »

Jobs have become popular especially among the youth, despite the stress caused by angry calls.

Louis Siose : « Sometimes I turn the mute on and shout profanities in my own langage just to release the anger. »

In addition to all that stress, many are forced to work during night time, to answer calls from America.

Braden Wheeler : « The worker here will almost mimic the work environment of whatever company they are the support of. For example, if they are supporting a company from the US, they will have the same working hours and follow the same holidays pattern. »

Not suprinsingly, Filipino operators are exposed to the same kind of disease than their American counterparts, including hypertension but also obesity.

« For example, in you walk out at any call center at 2 in the morning. Most of the things accessible for eating will be KFC and McDonalds. »

To address this issue, Wheeler has set up his own business, Livewell, within call centers. With his two other associates, they offer sports classes such as zumba, healthy meals, and the possibility to track your diet online. According to a recent statement by the Philippine central bank, the BPO sector is seen to produce the most income. Companies now realize the importance of working conditions for their own productivity. Some provide access to a gym or other state-to-the-art facilities 24 hours a day.